When I mentioned to a Colorado state official that I was doing a story on Kayvan Khalatbari and planning to call him “king of cannabis,” the guy nodded his head and said, “that fits.” 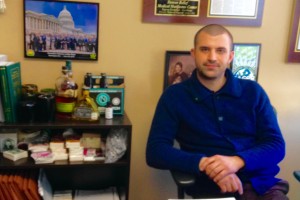 Khalatbari in his office.

Khalatbari is well known in Denver – and beyond  – for his passion for pot and his public antics. An early advocate for legalization, he wore a chicken suit to harass Gov. Hickenlooper on many occasions. He ran for Denver City Council in 2015 and lost.

But he’s also known for his business savvy. 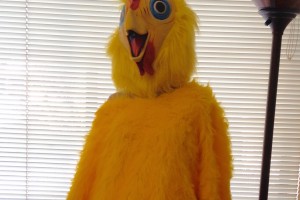 “If I can create my entire world through my businesses, I’d do it,” Khalatbari said, sitting behind a desk stacked with papers. His office could belong to any business person, except for the life-sized chicken suit standing in the corner. Note Khalatbari didn’t say, “if I ‘could’ create.” His active grammar belies he’s actually creating his own world. He not only owns the oldest marijuana dispensary in Denver, he consults on the pot business internationally, and has his hand in many pies – from pizzas to magazines to a comedy club. And he’s nowhere near done.

So, does he sleep?  Not much – the day I interviewed him he had gotten to the office, a corporate-looking workplace at 5:30 am.

Khalatbari co-owns Denver Relief, opened in 2009 to sell medical marijuana, a motive still touted as part of its core mission. It added recreational products when they became legal in Colorado in 2014.

Khalatbari’s entrepreneurial and personal interests extend far beyond cannabis – and beyond Denver. He’s partnered in an international cannabis consulting business, complete with an academic expert. He also co-owns some Sexy Pizza restaurants, SexPot Comedy shows, supports a magazine, Birdy (so he can control his own advertising, he said), and is active in philanthropic endeavors. He believes the public face of the pot business is important. One major activity of his Green Team is picking up litter at Denver’s notorious 4/20 pot celebration. The Green Team also repairs bikes and wheel chairs for free and Khalatbari is on the board of the Colorado Youth Orchestra.

Now in his early 30s, Khalabari admits to smoking pot every day, just like, he says, some may relax with a glass of wine or beer. He was alert and focused when we met. He said he started his marijuana use at age 16 in Lincoln, Nebraska, where he grew up. Half Iranian, his refugee father met his American mother in college. (Lincoln is one of the major U.S. assimilation points for refugees.)

“I couldn’t deal with office politics,” he said. “I was dying inside.”  He said he weighted 30 lbs. more than he does now.

In 2004, he struck out for Denver, bought a cheap house, rented it out, and for nine months slept in a tent in the backyard.

He volunteered for Sensible Colorado, an organization working for marijuana reform and SAFER, another pro-marijuana organization founded in 2005. Khalabari lobbied actively to legalize marijuana in Denver (hence, the chicken suit, one of his tactics).

Not surprisingly, Khalabari sees cannabis as a major public health issue and believes the U.S. should decriminalize possession. Currently four states, Colorado, Oregon, Washington, and Alaska, allow recreational pot use, many others allow medical uses. Individual cities, two in Maine, allow use. The attitudes toward marijuana seem to be changing – and Khalabari wants to be on the forefront.

Although recreational pot use is illegal on the federal level in the U.S., in July, 2015, President Obama demonstrated leniency for drug infractions by pardoning 46 people incarcerated for non-violent drug offenses including Denver Bronco Demaryius Thomas’ mother.  (Marijuana for medical use is legal in 23 states and the District of Columbia.)

“In Portugal a few years ago citizens decriminalized all drugs.  Drug use had been the number two health issue – after legalization, it came in 19th,” Khalabari said. “I know people who are addicted to fast foods,” he added, “and obesity kills.”

His belief in the product is complete. Obviously, there are owners of dispensaries in Denver and other places who are in it only for the money. That isn’t the case for Khalabari. 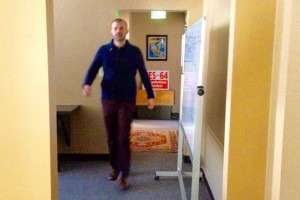 A man on a mission

His passion for pot has extended beyond cannabis as a drug.  He’s now focusing some of his considerable attention on hemp. Hemp is the name for the stems, the woody part of the plant. For hemp harvesting, most is cultivated from a different strain of cannabis than for pot. Cannabis has been cultivated for thousands of years – but it is currently illegal to grow the plant for its hemp in the U.S.

Because of the cloud of illegality hovering over hemp, it seems not too many people may know the real possibilities of hemp as a commercial product. Khalabari does.

“There’s almost nothing we can’t produce with hemp,” Khalabari said.

He said, and online research supported, that hemp can be used not only for paper, fiber, clothing, and cooking oil, but also for a surprising number and array of products such as fuel, carpets, glass, foods, animal bedding, building materials, “hempcrete” (a lighter type of concrete), and even plastic. It can even be used in various forms for water and soil purification and weed control.

Lest we see that as some overblown desire for an economic hemp heaven, in the 1940s Henry Ford built a car out of hemp plastic.  He claimed it was stronger than steel. (I’ll admit, I was surprised!).

“I want to create Denver as the beacon for hemp, “Khalabari said. And it’s not because he needs the money (he’s a millionaire). He sees it as a solution to many social and environmental problems. It would create jobs, allow a wide range of products to be made locally, thereby cutting down drastically on environmental pollution by reducing the need to transport products vast distances.  And with so many locally made products, we could become more self-sufficient, less dependent on foreign and other powers.

But right now, that’s not happening.  So for now, Khalabari is Denver’s king of cannabis, its master of marijuana, but if he keeps on the way he’s going, one day Khalabari just might be the high-priest of hemp.  Stay tuned.