Can smiling change your life? 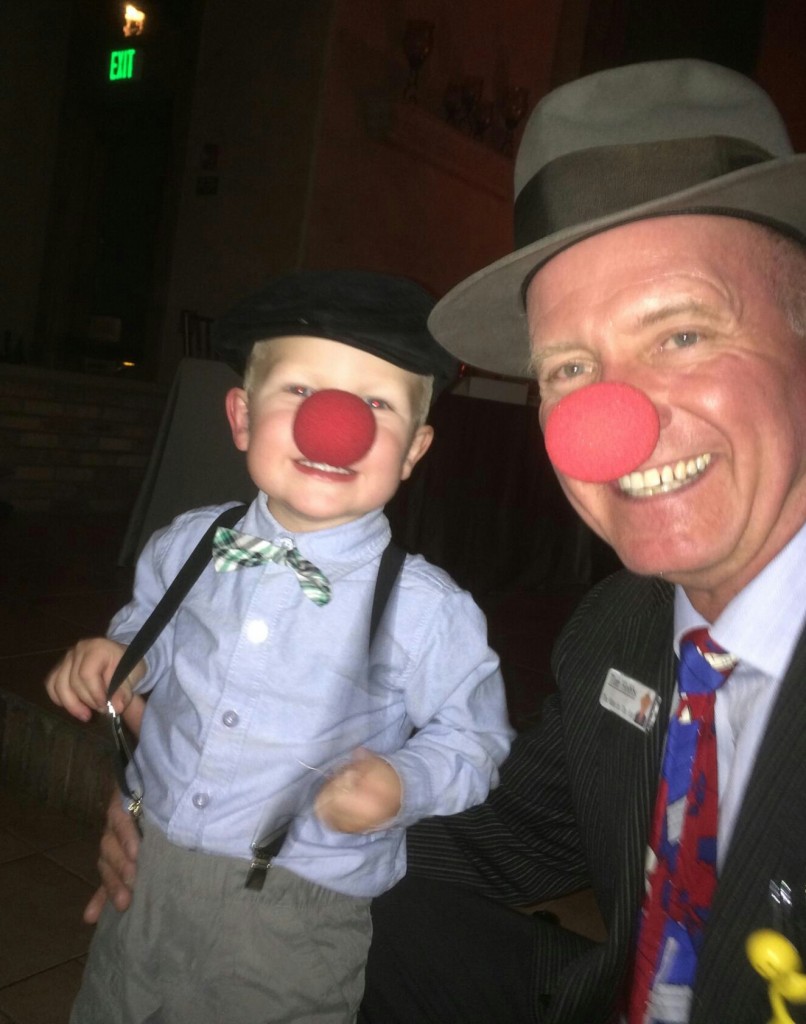 It did Tom Hobbs’. And he’s committed to making sure smiling changes yours, too. Hobbs has made “causing smiles” his job, and he sells the idea to everyone, from kids to corporations.

Hobbs is not only talk, he’s action. 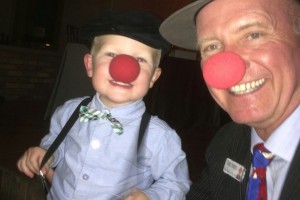 Hobbs clowning around with his nephew.

He smiles at random people on the street, complements strangers for smiling, has whole presentations on smiling. As a professional speaker, he has presented to business groups not only in the U.S., but also in Singapore on the benefits of smiling.

The benefits of smiling

What can a smile do? Hobbs learned a major lesson as a kid. His older brother came home from school one day and bragged how he got out of trouble by smiling. According to Hobbs, his brother said, “The teacher can’t send you to the office if you’re smiling.” Right then, at age 10, Hobbs got hooked on the magic of a smile.

But he took smiling in a slightly different direction from his older bother, not as a way to get out of things – but as a way to get into things. He got involved in children’s theater and clowning – beginning his lifelong commitment to causing smiles.

Today, Hobbs has a more broad-based view of the benefits of smiling, referring to a TED Talk video. He summed it up this way. “British researchers found that a smile can generate the same level of brain stimulation as 2000 bars of chocolate. Smiling reduces stress levels by enhancing hormones like cortisol and dopamine. It reduces blood pressure. Some researchers are even connecting longer lives with those who smile more. And, if that is not enough, when you smile you look more attractive and more confident.”

The Man in the Hat

Hobbs has another trademark – hats. And he is a man of many of them – literally and figuratively. He bills himself as The Man in the Hat. 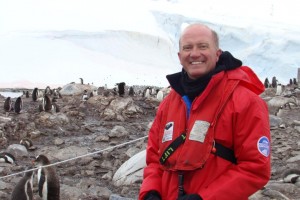 Hobbs in Antarctica with penguins.

Before devoting most of his energy to being a motivational speaker, some of the jobs Hobbs has held are: aircraft mechanic, landlord, handyman, owner of a large Christmas light installation company – still, in its 19th year, dance instructor (ballroom, country, and Latin), and dance host on cruise ships, including the Queen Mary. The cruises took him to many countries, Peru, Antarctica (where he was a Penguin Crossing Guard), Italy, Brazil, plus other countries, 137 to be exact.

It was on one of those cruises, to Ecuador, that he discovered his trademark hat – the “Panama Style” hat. According to Hobbs, the Panama style hat originated in Ecuador

Since 2009 when he bought his first one, Hobbs has worn out more than six. He wears a Panama hat whenever he is speaking to a business group, networking, or otherwise selling the benefits of smiling. And there are other times, too.

Hobbs volunteers for the non-profit organization, Spellbinders, which sends storytellers into classrooms, senior centers, cub scout meetings, and other venues to tell stories, from Aesop’s Fables to original stories. By heart, no reading. Why? “To engage the imagination,” said Hobbs. “And we need imagination for everything from solving business problems to being good neighbors to having fun.” 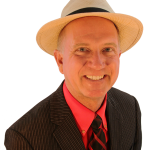 Hobbs in his trademark Panama

It was during one of those school visits that Hobbs’ hat almost got him into trouble. Schools don’t allow kids to wear hats. In came the Man in the Hat. Hobbs got taken to the principal’s office. The principal took one look at Hobbs’s Panama and, according to Hobbs, said, “OK, I’ll allow it. I’m so glad to show the kids what a real hat looks like.” (Hobbs was probably wearing a smile, too.)

In addition his Spellbinders work, Hobbs also volunteers for Junior Achievement and the Red Cross as an ambassador speaker.

Sometimes you need a reminder

In the hassle of everyday life, Hobbs says sometimes it’s hard to remember to smile. So part of Hobbs’ advice is to have a physical reminder. It can be anything from a simple photograph on your desk to a trinket given to you by a child. 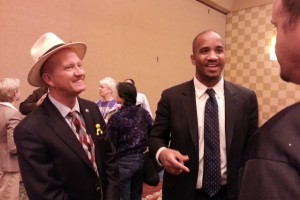 Hobbs with Mr. Yellow in his pocket at a professional event.

For Hobbs, it’s Mr. Yellow, a small yellow toy figure, a reminder of humor born out of a painful moment. He was sitting with the eight-year-old daughter of a friend, both of them dealing with the death of the girl’s aunt, Hobbs’ best friend and business partner. Hobbs tried to make the girl smile – using a patch of sunlight and calling it Mr. Yellow. It was a moment of special connection and, indeed, it did cause the girl to smile. So Mr. Yellow became Hobbs’ reminder, one he carries with him often. He has randomly given away over 173 little yellow men over the past two years.

Understanding the value of smiling certainly changed Hobbs’ life. Now he’s out to change yours – with the backing of science. But whatever the reason, from good health to good business, to just plain friendliness and joy – count on Hobbs to be committed to making you smile.

Hobbs is also very active in Toastmaster’s, having been a District Governor. His websites are www.TheManInTheHat.net . www.CausingSmiles.com

To read about other fascinating people doing unique things, click on the “People” tab in the blue navigation bar at the top of the page.

previous post No more roadblocks for her
next post Odd job or dream job? Counting trees
Back to top
mobile desktop