Passion for the right coffee rules her life

They called her “coffee girl.”  She was 22, traveling in a bullet-proof car with a small group of much older coffee buyers, all men. They were taken deep into the interior of Colombia at a time when more than 3,500 people a year were kidnapped there. 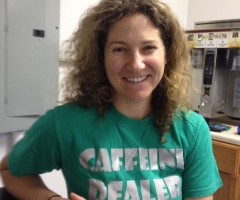 Fortunately, they also had armed guards.  But when the others left for home and Jackie was taken deeper into the rural areas, she said she was terrified.

But that experience didn’t scare her away from her passion, finding the right coffee beans and roasting them the right way.

It’s about nine years later, and now Jackie Harris operates as Jackie’s Java out of a small warehouse in Ft. Collins, CO.  She still travels to Central and South America.  She’s personally selected beans from farmers in Colombia, Brazil, Costa Rica, and Panama.  She would have it no other way.

Jackie is adamant about what she calls “real fair trade.”  “What’s known as Fair Trade is really an organization that charges the buyer extra and also takes a cut from the farmer.  I think it’s a rip off.  I buy directly from farmers and pay them a good and fair price. That’s what fair trade should be.”

Indeed, she still buys from the farmer she met on that first frightening trip to Colombia.

Jackie’s passion for coffee started when she was in high school.  She had to take a two-hour bus ride to attend classes in Lakewood, CO.  She left early in the morning and it was a struggle to stay awake at school, she said.

“About this time, Starbucks was just getting popular and I discovered those bottled coffee drinks.  And I ended up spending all my babysitting money on coffee.”

It was a new discovery for her.  Neither of her parents drank coffee.  (Now her father does – but her mother is still strictly tea.)

As a student at Colorado State University, she majored in business, worked in a coffee shop, and dreamed of owning one. 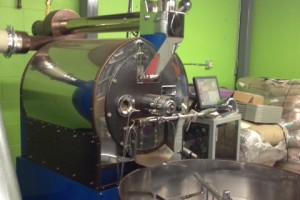 Her new roaster is far cry from her first experiment.

Then something happened – she became fascinated with roasting coffee.  She invested all her savings in buying a small coffee roaster.  For a year, she experimented – and documented the internal and external temperatures, humidity, wind, and other conditions every 30 seconds.  She did this for a full year until she had a notebook full of information – and her own “recipes” for roasting coffee.   (These recipes have now been translated into a computer program that controls her coffee roaster.)

Jackie showing some of her current beans, pre-roasting.

She bought her first beans from a Denver man who drove to Mexico in an old school bus and filled it with bags of green coffee beans.  She said,  “He was the one who gave me the idea to buy coffee direct from farmers.”

Then she took her infamous trip to Colombia.

It was the end of the Farmer’s Market season when she took her first few bags of coffee to the Ft. Collins market to see if she could sell them.  Sell they did, and one buyer, owner of a coffee shop, placed an order.  Then so did the Cupboard, an upscale kitchen store. 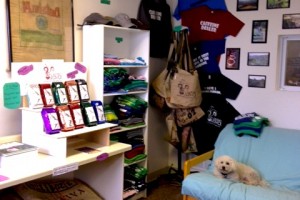 The front office, with friend.

People liked her coffee – she had discovered a way to eliminate the bitterness found in most coffees.  How?  Jackie said, “It’s the right mix of beans, humidity and temperature every second of the roasting process.”  And?  “I guess I have a feel for it.”

Most of us see coffee as fragrant brown beans or dark liquid in a cup.  But to Jackie, each step in the process, from cherry on the tree to vacuum-sealed bag, is a precious journey.

Coffee beans are the seed of a fruit called “cherries.”  Growing conditions are critical, requiring the right mix of soil conditions, shade (not sunlight) and irrigation.  Interestingly, rows of  beans are often planted in between the cherry trees to add nitrogen to the soil, according to Jackie. 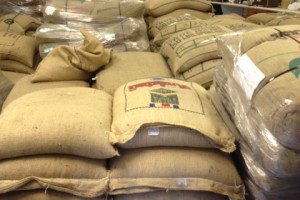 Her selected beans are shipped in canvas bags.

She explained that the cherries don’t all ripen at the same time.  Ripening takes place over eight to 10 weeks, so the farmer has to pick the cherries carefully in waves.  Then the cherries are floated in a water bath and often put into a kind of grater to get the fruit off the seed. Then the seeds are fermented for about 20 hours.  The coffee beans then go to a central mill to be dried and stored.  All this before export and roasting.

From bean to cup, from passion to business 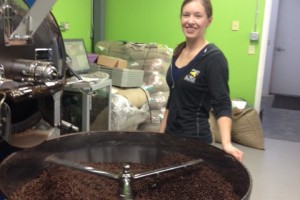 Jackie has had to navigate many more hurdles than those she encountered on her first trip to Colombia some dozen years ago – health department permits, the fluctuating price of beans (the price has doubled since last December), international shipping rules, changes in weather conditions both in the growing regions and in her roasting room, decisions on different flavors, packaging and marketing, and personnel. Currently Jackie has two full-time and 3 part-time employees. 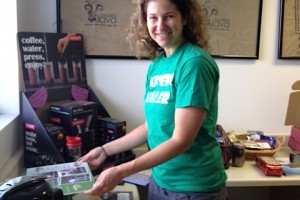 Jackie in the reception/display area.

Jackie’s Java has been approved (it’s a two-year process) for sale in the Whole Foods Market and Natural Grocers’ chains, but it is still up to the the individual store managers to purchase it.  Many coffee shops and specialty stores carry her coffee – and devotees purchase it online.

It’s a good thing Jackie has a passion for her java, because after visiting her operation, it’s clear that selecting the right bean and roasting it just right take huge amounts of time, knowledge, energy, and stamina.

The “coffee girl,” it seems, will still stop at nothing to get the coffee right.

For more stories about fascinating people, Click on the “People” tab in the blue navigation bar at the top of the page.