Traveling solo – Where is Julie now?

When we last left Julie, she had just gotten back from a trip to Peru and was vowing to move to South America. First she needed to save money, learn Spanish, get a job there, and figure out what to do with her condo, current job, and belongings. 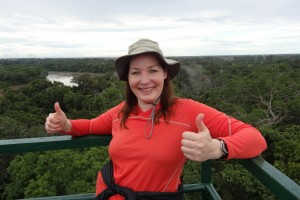 Julie at the Amazon, Peru.

That was close to three years ago. This 40-something adventurer didn’t spend the rest of her life there as planned, but she did have a fascinating six-month adventure during which she learned a lot about traveling solo – and about herself.

“I always travel solo,” Julie said. “I prefer it that way. In South America, though, I got a lot of looks traveling solo, but I wouldn’t trade the experience for anything. I learned there are lots of angels along the way, a lot of wonderful, helpful people in every country.”

A coffee shop friend in Punta Arenas – they exchanged earrings.

Julie set aside two years to plan her adventure. To help save money, she rented her condo two years before she left and lived in a basement apartment, practicing living without air-conditioning and most furniture. In addition to working and saving as much money as she could for the trip, Julie identified language as a first priority. She enrolled in an intensive Spanish program and did her homework religiously. She thought she was pretty conversant.

Next she knew she needed a job there, and teaching English seemed to be the best bet. (Although she’s a nurse by training, she’s only worked in a clinical setting for a year and the rest of her career has been in medical sales and technical support.)  Wanting a job that gave her some flexibility, not a 9 to 5 routine, she got her certificate in ESL (English as a Second Language). That was a six-month endeavor.  She was hired by a private educational organization, expecting to teach in classroom. (A surprise there, too). 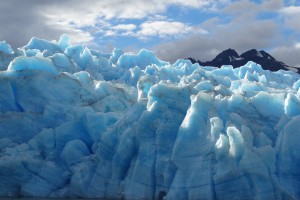 To prepare for traveling solo, Julie researched the places she felt she had to visit – Patagonia, Easter Island, Ollantaytambo in Peru, Buenos Aires, for example. She studied the major highlights at each place, transportation, tours, and accommodations. She was very thorough, although that did not protect her from surprises.

Advice from Julie – Stay flexible, have a loose agenda. There are always surprises!

Some preparations were Denver-based, she enlisted the help of her sister to handle her mail, a friend to let her use her address for mail, someone to check her condo. Just before she left, she stored her last, most important personal items.

It was a long two years of preparation. “I wanted to be prepared mentally, financially, and emotionally.” She said. 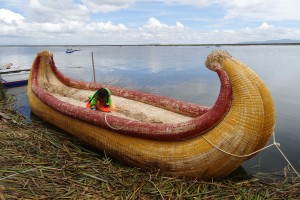 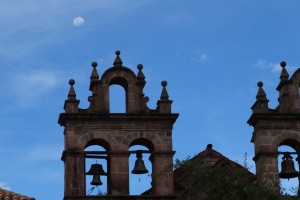 On a cloudy day in February 2013, Julie set out, traveling solo.  She took her two large suitcases, one carry-on, backpack, and camera, computer, journal, maps, and cell phone, and flew to Peru. She wanted to visit Machu Picchu one more time, as it was there she was so moved by South America that she vowed to live there. On this trip, she visited Arequipa, Colca Canyon, Lake Titicaca and spent time in the Amazon Rain Forest. 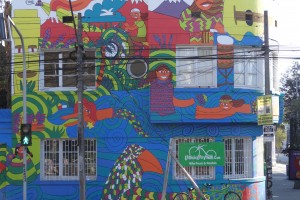 Then she took flew to Santiago, Chile and got settled in her apartment (bedroom, bathroom, and shared kitchen) in a house referred to her by the teaching organization she was working for.

“Fortunately, the couple I lived with spoke English, because by this time I realized my Spanish may have been pretty good on paper, but for everyday life, it was really not adequate,” Julie said. “I ended out writing things out on paper lots, but it was still a struggle. My landlords were some of the angels I relied on, giving me a home base, telling me so many things about how to get places, about the culture, and speaking English!”

Julie learned – 100 hours of Spanish class is not enough. “I spent a lot of time smiling.”

Teaching English – not quite what she thought

After getting acclimated, Julie reported to work. Her job, it turned out was not in a classroom, but teaching private English lessons to rich kids in suburbs that took an hour or two by public bus to get to. Julie didn’t like the math – about three to four hours of travel for one hour of work. She quit. She had hoped for “more Third World” experiences, not “kids who asked what version I-Phone I had.”

On electronics, Julie had her computer (“invaluable!”), but not phone service. She decided not to pay for international service, and would use free Internet-based phone services like Skype and the Viber app. She used her smart phone for taking pictures, listening to music, internet access in wifi cafes, and various applications. One of her concerns was the safety of her camera, computer, and phone. She was very careful with all these, nevertheless, her phone did get stolen her last week in South America.

“Feeling frustrated and homesick after quitting my job teaching English, I launched Plan B.,” she said, “traveling solo around South America.” She kept the apartment ($400 a month) as her home base, leaving most of her luggage there because she traveled lightly, mostly with her backpack and small suitcase. 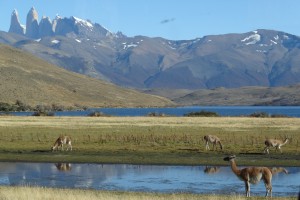 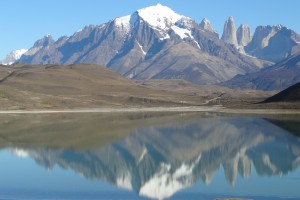 She flew to Patagonia, in southern Chile, and splurged on a week-long trek through Torres Del Paine National Park, a paradise of mountains, lakes, rivers, 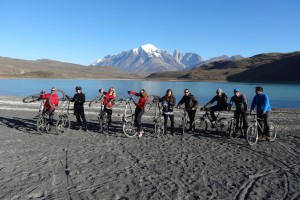 waterfalls, avalanches, and wildlife. Although she was on a tour with other hikers Julie didn’t trek as far as they each day. She hiked 10 to 15 miles a day, so one of the guides stayed with her, giving her a private-guide experience. After four days of hiking, on the fifth, they biked.

It was cold when they set out in April (July is the coldest month in Chile) and her tour was the last one out for the season. Southern Chile close to Antarctica. But the group of 12 had a merry time – “most of them partied all night,” Julie said, “but I stuck to my plan and got enough rest each night. The others were on a 10-day holiday and would be going home, but I knew I had keep my strength up.”

Julie went to Buenos Aires for 10 days.   Also Iguazu Falls in Argentina, another World Heritage Site, with the falls spanning 2700 meters wide and 80m high. “It took my breath away,” Julie said.

Advice from Julie – Stay in hostels in different parts of town. That way, you can walk just about everywhere and see many parts of a city. And be smart about where and when you’re out in the streets. 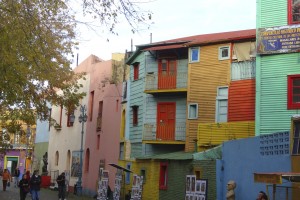 “I walked everywhere – so by staying in different parts of town, I could walk around and see just about all sections/neighborhoods of a town, “she said. “And I always got a map of the area and studied it carefully.”

“Throughout my trip I didn’t go out at night alone – I would walk all day and have dinner near the hostels around 6 or 7 then go back for the night and read up on where to go the next day,” she said. 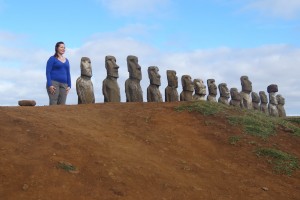 Easter Island, one of the most remote inhabited islands in the world, a five-hour plane ride from Santiago, was on her list of must sees. The site of many volcanoes, it’s a 63-square mile small Polynesian island and World Heritage with Moai statues situated around various places on the island. Some say the Moai are have sacred origins, but they remain a mystery.

“Cycling solo on the island one day, I met many of the local ‘Rapa Nui’ people,” Julie said. “I saw how they create art to earn a living, and how they live a carefree life on this remote island where tourism is the only economy. And one night I enjoyed being entertained by the Polynesian dancers, experiencing some local traditions, eating local foods. It was wonderful.” 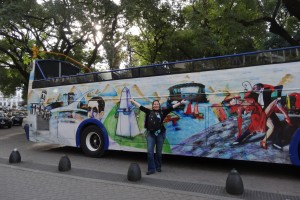 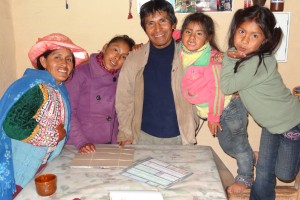 Julie used lots of transportation modes – lots of walking, renting bikes in some cities, public buses, planes, and taxis.   Her longest bus trip was a two-day ride from Santiago to Peru. She met an “angel” there, too.   Nights on the bus were cold – and a Peruvian guy shared his blanket with her and helped her get food. He spoke some English – and according to Julie, saved her from a miserable ride.

Another long excursion that turned out to be more of an adventure than she anticipated was her taxi across the border from Arica, Chile into southern Peru. Of course, taxis only take cash.

Advice from Julie – check your ATM card to see if there are banks in every city you go where you can get money. I ran into many banks where my card didn’t work. And don’t carry more than $100 or $200 with you at any one time. You may need this much because not everywhere takes credit cards, like in the U. S. Restaurants, and many hostels only take cash. And I had to pay the rent on my apartment in Santiago in cash. That was a careful maneuver – when I got the money and where. Know that will be an issue when you travel. 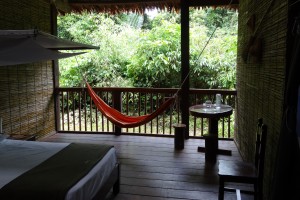 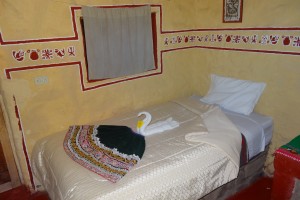 “I had to make sure I had enough cash for all my daily expenses, food, buses, entry fees to some sites, and even some hotels (cash only). Many times ATM machines were hard to find or my card wouldn’t work in them. Actually, a couple of times I had to wire myself money from a Western Union to transfer it to myself,” Julie said.

But the trip, traveling solo, seems to have been worth it for Julie – she experienced “not only hundreds of magnificent sites, unique and vibrant colors everywhere I went, new and exotic and delicious cuisine, markets, and the smells and sounds of Chile, Peru, and Argentina, but also connected with people that remain in my heart (and email list and Facebook) today.” 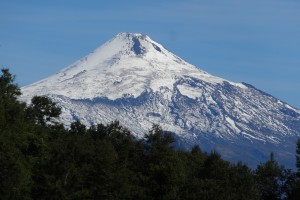 Pisco sour, a favorite Peruvian drink – against the glacial ice.

“Although I didn’t realize my original plan to move to South America and work there long term, I had six months of indescribable experiences. I can’t wait be traveling solo somewhere else! Maybe not forever – I’ll be a bit more realistic next time, not give up my job and condo and just take a vacation.”

Story by Bojinka Bishop, photos courtesy of Julie Riedmiller.  Read her earlier journey and find out about other fascinating experiences and people by clicking on the People button on the blue navigation bar above.

Disclosure – Julie first trip to Peru – which inspired this adventure was arranged by Cultural Expeditions, a cultural arts tour company specializing in tours to Peru.  The author is affiliated with Cultural Expeditions and invites you to check out these first-class tours, specializing in archaeological sites, plus specialized tours focusing on textiles, cuisine, orchids and birding, plus Amazon adventures.