You don’t have to be single to enjoy going solo. This Ohio wife and mother took off to Paris and went to baking school. It helps that she’s French, of course. Helps that she had an apartment there. But her solo adventure was still hard work. And a labor of love. 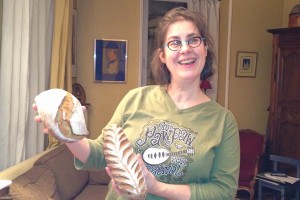 “Ever since I was a little girl, I have loved, just loved, the smell of baking bread,” Francoise Cauchie from Athens, OH, said. “My grandmother used to take me to the bakery and I was just enthralled, by the smells, the shapes, everything!”

Then growing up took over – college in Paris, graduate school at Ohio University, jobs in California, Paris, Munich, London. Jobs that had nothing at all to do with baking. Then marriage, a move to the USA, and in Athens, Ohio, motherhood, and a serious longing for bread. Not just any bread, but real French baguettes.

To the French, bread is almost holy. It’s part of their national identity. And in France, according to Cauchie, no one can bake breads to sell commercially without having a diploma in baking.

“A person can own a boulangerie without having a diploma but must employ someone who at least has a CAP in boulangerie.” A CAP is a Certificat d’Aptitude Professionelle. In other words, he or she must have graduated from a reputable school and passed written and oral exams and hands-on bread making tests.

Because Cauchie is French, grew up in that tradition, and cannot imagine opening a bakery without proper training, she felt she had to earn a CAP. 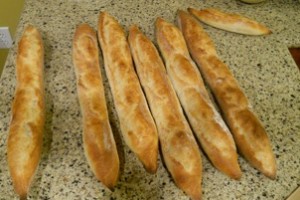 To make sure she was on the right path before taking this big leap, Cauchie practiced making baguettes in quantity for her family then friends. She adjusted her mixing and yeast techniques, bought special clothes (couches) for proofing the doughs and quarry tiles to bake the bread in her ovens. She experimented with the whole process.

Her work was beginning to pay off. Her friends kept coming back and asking for more. Encouraged, she signed up for two-week workshop at the San Francisco Baking Institute on bread making. When she came back to Ohio, she began to sell some baguettes out of her house. Friends told friends, and she found herself spending more and more time in the kitchen, a kitchen now filled with pans, flour, bowls and the warm smell of fresh baguettes.

Real French baguettes are best when eaten within three hours of baking. Cauchie cautioned her customers, “If you’re not going to eat the bread within three hours, you must freeze it. Then thaw it in a 350 degree oven for five minutes.

“Baguettes lose their true flavor when left out.” She’s right – and she’s that picky and passionate about the taste of her breads.

Cauchie found out what she needed to know – that she did indeed love making baguettes, she enjoyed the discipline and challenge of doing each step at exactly the right moment, and, just as important, people loved her breads.

“I began to feel this really was my true calling,” she said. 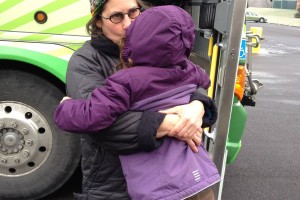 A tearful “good-bye to her daughter

It took her about six months to put her going solo plan in place – applying to school, taking her Montmartre apartment off the rental market, figuring out her finances, and realizing she would be saying “good-bye” to her family.

She was accepted to the Ecole de Boulangerie et Pâtisserie de Paris and set off in the cold chill of January from Ohio to study at this well-known Parisian school founded in 1929. 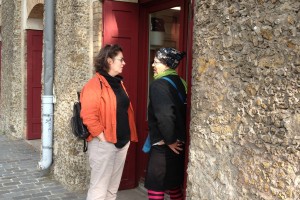 Cauchie with a friend in front of the Ecole.

Cauchie attended classes five days a week from 1:00 to 8:00 pm for four months. There were three cohorts of twelve people each in her class and she was the only student from the U.S. Each cohort was assigned to a large professional kitchen stocked with equipment and ingredients. And after a full day of measuring, mixing, and baking, they had to scrub the kitchen clean every evening.

She also apprenticed at La Pompadoure in the 16th arrondissement of Paris, spending a month experiencing production in a ‘real’ bakery. 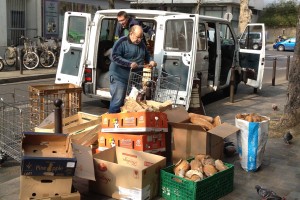 The bread the students made was loaded on a truck daily and donated to the needy.

In addition to baguettes, classes included lessons in making other breads such as rye, country, and whole wheat and practicing various regional shaping of breads. She also learned to make croissants, pains au chocolat, brioches, pains aux raisins to name a few.

Her least favorite to make? “100% whole wheat or 100% rye breads. They’re very dense. I like breads with structure, holes and color variation.”

Inside story on Croissants

Croissants are so hard to make and so time consuming that even in France there tend to be suppliers for boulangeries and pâtisseries.

“The hands on exam was really hard!” Cauchie relates. “You had seven hours to create baguettes, country loaves, croissants and milk breads. We knew what we had to make but we did not know the volume and shapes. It was a lot of pressure!”

Even though in the U.S. there is no requirement for any kind of education or certification for selling breads, for Cauchie, “it just felt right. I wanted to bring the French tradition of bread making to Ohio,” she said.

Cauchie has a dream – to open a bakery and offer her customers that experience she had when she was a child – the irresistible smell and real taste of fresh French bread. 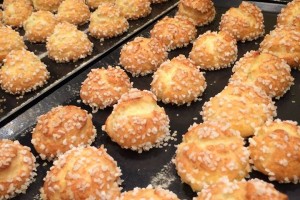 In the meantime, having outgrown her home kitchen, she gets up at about 2 am to bake her tartes, quiches, butter croissants, almond croissants, pains au chocolat, pains aux raisins, and chouquettes in the kitchen of Restaurant Salaam on Saturday mornings. Then she transports them to sell at the Athens Farmers Market on Saturdays from 9:00-noon. Needless to say – it makes for a tiring day. But it surrounds her with the smells, tastes, and textures she loves.

Cauchie decided she had to be going solo, at least for a while, to follow her dream.  It not only enriched her life, but also those who now taste Paris on Saturday mornings in Athens, Ohio.

Story and photos by Bojinka Bishop, except where noted.  October, 2104

For more stories about fascinating people – click on the “People” tab in the navigation bar.