How many trees are in your favorite park?  On your street?  What kind are they? Are they healthy? Don’t know?  If you live in one of 33 North American cities, probably “Evelyn” does.  She travels the country – from inner city parks to luxury neighborhoods – analyzing and cataloging trees. 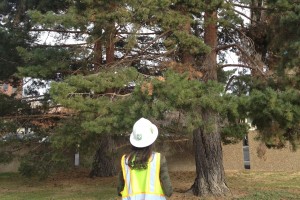 Evelyn on the job.

Being outside, traveling, seeing how life is lived all around the country, meeting new people. A dream job?  You be the judge.

“Evelyn” is a 43-year-old arborist employed by a large tree company who prefers to remain anonymous (her name is not really Evelyn). 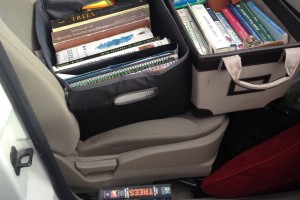 Her life for the past six years has been nomadic, living in extended stay hotels for months at a time, from three to six months usually.  She travels in her small company car with an array of resources for her job – books, maps, vests, hardhat, computer – and whatever clothes and personal items still fit.

Although looking at trees sounds like a peaceful occupation, sometimes it’s not. 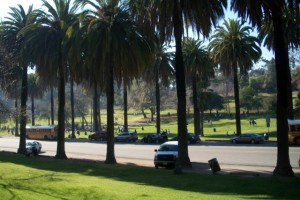 “When you’re in certain parks or neighborhoods where there may be lots of crime or drug activity or addicts, it can get a bit scary,” she said. “People wonder what I’m doing there  – a woman in a safety vest with a computer marking things down.  Sometimes they think I might be the police. But I look people in the eye and smile – and after I say I’m inventorying their trees, I think my being there, paying attention to their neighborhood, caring in a way, is appreciated.  Actually, it’s in some well-to-do neighborhoods that I encounter hostility – like “Can I help you? What are you doing here?”

So although Evelyn’s main task is inventorying city right-of-way and park trees, and she pretty much works alone, there is a significant people dimension.  Seeing first-hand how many disenfranchised people live has infused her with a certain sadness. “I’ve pretty much seen it all.  Sometimes it seems humanity is forgotten,” she said.

And Evelyn encounters many trees that seem forgotten too.

“Some of our parks are like the third-world,” Evelyn said.  “Homeless people, gangs, trash, plus trees that are diseased and water-starved, or damaged by reclaimed water.” 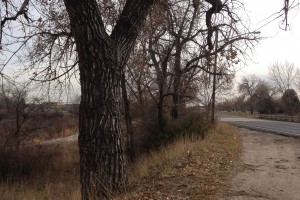 Trees by a public bike trail.

Taking care of a community’s trees is a major expense for many cities.  Tree care is not just for looks – falling branches are a major concern.   But in this age of reduced budgets, competing community needs, and even bankrupt cites, tree care is often one of the first budgets cut.

According to Evelyn, trees on public lands, right-of-ways, parks, open spaces, and the grounds of city facilities require care.  They need trimming, sometimes spraying to prevent insect infestations or diseases, removal of trees or limbs that pose a public safety hazard, and often, replanting.

According to Evelyn, Dutch Elm disease has wiped out tens of thousands of trees across America.  There is a huge problem in the Central Valley of California where broadleaf mistletoe is wiping out ashes, flowering pears, and hackberries that were planted in front of people’s houses and in transportation corridors.

Most recently, a non-native pest, the Emerald Ash Borer has caused the destruction of hundreds of thousands of trees throughout Midwestern states and into Canada, trees that used to line streets, softening neighborhoods, providing bird habitat, and giving shade and beauty. 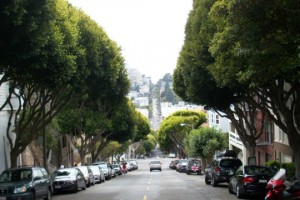 “In the past, cities would plant virtually the same tree species on their ROWs (the space between the detached sidewalk and curb) so when a pest or disease came along, the city had so many dead or hazardous trees to manage,” said Evelyn. “Thankfully, cities have gotten much more progressive, planting a variety of tree species to ensure a diversified canopy.”

Summer through winter, in all kinds of weather, in parks, alleys, city streets, and suburbs, Evelyn is out there documenting trees.  She has to pay attention to more than just the number of trees, there’s the species, the size (height, canopy width, for example), the age and condition, “growspace, sidewalk life, clearance for pedestrians, cars, and traffic signs and signals.”

She has, of course, an encyclopedic knowledge of tree species  – and there are thousands in the U.S., some native, many introduced from other countries, and thousands upon thousands of “cultivars” and hybrid mixed species.

Because there are so many species (and subspecies), even Evelyn, who can identify most trees by simply looking at their bark, is stumped sometimes and, being a fanatic about accuracy, has to research them sometimes.  Hence her traveling library.  According to Evelyn, the photos are clearer in her books than online.

How did Evelyn learn all this?

Evelyn grew up in Montana, New Mexico and the Pacific Northwest, where there are gigantic trees.  She knew she wanted to do something with the environment, was really good at math, and found herself in a required botany class in college.  She had an aptitude for it. She reported that her first paper identified 100 different tree species.  So she switched her major to botany.

After having a couple of jobs and traveling a bit, she realized her dream job would be to travel around concentrating on trees.  She needed a master’s degree to work as an arborist.  So she earned a master’s degree in Science Forestry at the University of Washington, then two certifications from the International Society of Arboriculture, one as an Arborist and the other in Tree Risk Assessment.

But her learning is never over as new tree species are introduced into cities and towns all the time. 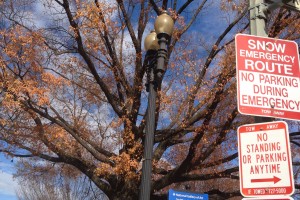 Dream job though this maybe, Evelyn faces challenges every time she goes to a new city to work – she has to figure out where to live (she prefers extended stay hotels with kitchens), where to buy groceries, where there’s a doctor – and, most importantly for her, she said, is where to practice yoga.

“Yoga is my home away from home,” she said.  “It grounds me, not only because the practice is familiar, but also because each yoga community shares the same spirit.”

She said she also finds the philosophy of her yoga, for example, “leaning in,” useful in scary situations.  Hence her serene smile and eye contact when the areas she’s working in may be dangerous.

What else allows Evelyn to be on the road all the time?  She’s very connected to her family and the island in the Pacific Northwest where she grew up.  She intends to return there someday, so she visits when she can.  And she said, she’s close to her mother.  “I call her every night.”

Story and photos except where noted by Bojinka Bishop, Dec. 2014

You can discover the fascinating lives of other singles by clicking on the People tab in the blue navigation bar at the top of the page – or learn about great places, things to know and do, all available through the navigation bar.

And – do it the easy way – find out what’s new on Flying High Solo by subscribing.  You’ll get a short email alerting you to new stories. See the Subscribe button near the top in the right-hand column.