We have champion skiers, champion soccer players, even champion eaters – but did you know we also have champion trees?  Every year we name more than 750 specific native trees in the U.S. “champions.” What do they do to deserve this honor?

Basically – they’re the biggest trees of their kind! 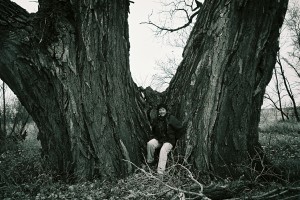 Author Kathleen Cain is dwarfed but this champion cottonwood.  Photo courtesy of Cain.

It all started in 1940, when a forester, Joseph Sterns, published an article in American Forests magazine, titled “Let’s Find and Save the Biggest Trees.” That same year, American Forests—the oldest nonprofit conservation group in our country—created what’s now called The National Register of Big Trees. The register includes the biggest trees from all fifty states and the District of Columbia. The program now serves as an international model for finding, measuring, and recognizing these icons of forest and field.

How many trees would that be, exactly?  Eligible species, native and naturalized in the United States (including Hawaii), number 870. The list has been developed according to two professional standard sources: the USDA Plants Database and the Integrated Taxonomic Information System (ITIS). 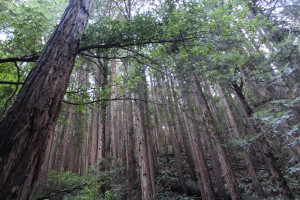 Not champions, not oaks, but still majestic and awe-inspiring trees in California.  Photo by Logan Dent.

America’s national tree is the oak, chosen, by popular vote, in a poll conducted by the Arbor Day Foundation many years ago. The enthusiasm translated into a Congressional mandate in 2004. More than 60 species of oak flourish in the U.S., so champions reign in separate categories. According to the Big Tree Register, a canyon live oak in Oak Glen County, California takes the overall size prize with 621 points.

Each state also has a special tree. For Colorado it’s the Colorado blue spruce.  Recently, in March 2014, the Telluride Daily Planet reported that Colorado now has a new state champion Colorado Blue Spruce. But at 315.23 points the blue spruce in San Miguel County still lags behind the current national champ residing in Utah: 328 points. The Colorado Tree Coalition is currently offering $500 to anyone who can find a Colorado blue spruce to dethrone the Utah champ. Interested? Follow this link for more information:  click here. 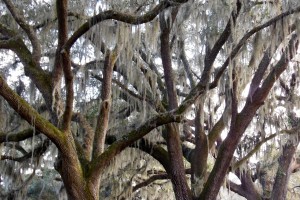 Competition among big tree hunters is fierce.  A Rio Grande cottonwood in Big Bend National Park, Texas held the big tree national title for many years. One year New Mexico biggest trees hunters thought they had a Rio Grande near Albuquerque that could take the Texas champ down (or up!). But as quick as you could say “cottonwood!” a Texas forester drove to New Mexico and measured the interloper not once, not twice, but four times—just to make sure that the Texas tree had not been usurped. It hadn’t been.  The new Rio Grande champion still is found in New Mexico. On the 2013 Big Tree Register it resides in Bernalillo, New Mexico. 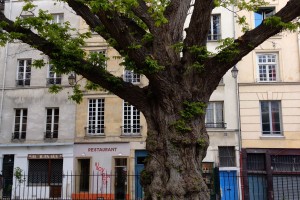 Not a champ, but lovely tree.

The point system used by American Forests to determine championship status works like this. Points are allotted for: circumference (in inches), height (in feet) and average crown spread (also in feet). Circumference is taken at four feet, five inches from the ground; an old foresters’ measure known as dbh, diameter at breast height. A special tool called a clinometer, which looks something like a sextant, is used to measure the tree’s height. Average crown spread is determined by calculating the widest and narrowest spread of limbs then dividing by two. If you’re curious, American Forests provides well-illustrated directions: https://www.americanforests.org/bigtrees/big-tree-measuring-guidelines/ 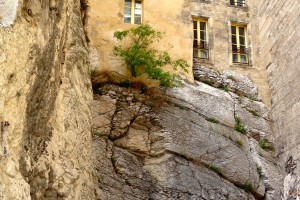 Trees can be found in the strangest places… this small tree clings to life in Avignon, France.

Not all champion trees are huge – or tall. It’s easy to think sequoia or redwood when considering Big Tree Champions—and it’s true, California’s General Sherman (giant sequoia) remains the largest single stem tree in the world. But American Forests also recognizes the biggest trees of the smallest species. After all, not every tree is destined to reach for the sky. Featured in 2012, the Texas’ Reverchon hawthorn in Dallas (leave it to Texas to have the smallest biggest!) weighed in at nine feet tall, 11 inches around, with an average crown spread of 5.5 inches. 21 points. The 2013 register reveals that the hawthorn is now 10 feet tall, 12 inches around, with a crown spread more than double, 11 feet, 11 inches. This Dallas tree was granted a special exemption, since American Forests abides by the USDA Forest Service definition: a tree must be 13 feet tall, with a trunk circumference of nine and a half inches, measured at four and a half feet above the ground.

Not just big, beauty, too 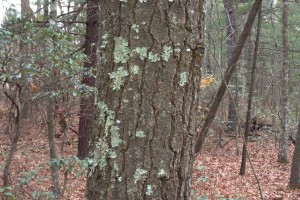 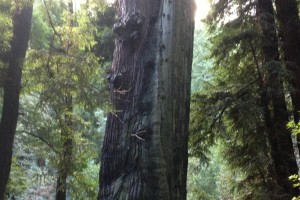 Up close- interesting designs can be found in the trunks and bark.

In recognizing nearly 800 species champions each year (and more than 200 species need big tree hunters to find them), American Forests does more than just brag about big trees. The program creates awareness of the beauty of trees and helps “educate people about the key role that these remarkable trees and forests play in sustaining a healthy environment.” Everybody knows that trees “breathe” oxygen into our atmosphere, but did you know that one large tree can provide enough oxygen for two people for a year? Or that a single tree can absorb 10 pounds of air pollutants in a year?

To manage this program, American Forests works with “Big Tree coordinators” in each state. You can find your coordinator, as well as your state’s list of its big trees, online here.

You might even consider a vacation of visiting some of the biggest trees. Many big tree champions reside on public lands accessible to everyone. For example, there’s a northern pin oak on the campus of the University of Wisconsin in Stevens Point.  And you can view two champion trees—a pumpkin ash and a swamp chestnut oak— at Big Oak Tree State Park in Missouri. Or, visit the behemoth live oak in Waycross, Georgia. Here’s a link that can help you plan. 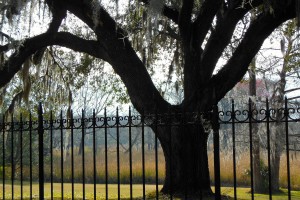 Not a champ, but a beauty.

Visiting a big tree champion can provide a new perspective. Simply standing and looking up at these natural wonders can be as inspiring as a visit to a castle or a cathedral. Many of the biggest trees are on private property, so contact your state’s big tree coordinator, local foresters, or tree organizations to see if a visit is possible.

It’s the nature of life to end and begin again. Trees are no different. The big champs come and go. One falls. Another rises. But before we fling up our hands in despair, let’s remember that trees, among the oldest creatures on our planet, are a renewable resource—as long we care for them in a way that benefits not just us, but the earth.

Article by Kathleen Cain.  Cain is the author of The Cottonwood Tree: An American Champion. Johnson Books/Big Earth Publishing. Boulder, CO. 2007. Available via Amazon . Join her in an aerial visit to a gorgeous old cottonwood near where she lives in Arvada, Colorado on YouTube.  You can contact her at: countessk@comcast.net

Photos other than those credited by Bojinka Bishop

Comment(s) on Look Up, Look Around: Celebrating Big Tree Champions