Passion for the land ignites activism 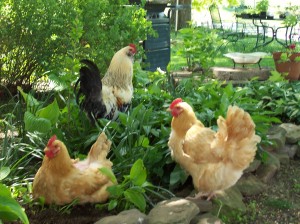 Young’s free-range chickens – part of her dream of going back to the land, a land free of pollution.

Solo Elisa Young moved to rural southeast Ohio in the mid-1990s to help take care of her grandmother.  She returned to live a sustainable life on a farm that had been in her family for seven generations and where she had spent her childhood summers.  Little did she know then what her future would hold.

Her dream was to create a “living and teaching center on sustainability” headquartered on the farm.  Young’s family farm is located in Meigs County in Appalachian Ohio.  It has rolling hills, flat land good for farming, forests, and is home to many species of native and medicinal plants.  And she thought, it was and would be free of pollution.

Ginseng, goldenseal and a host of other plants prized for their medicinal properties grow there.

So when Young heard that a highway would be built through the area, saw her beloved woods being lost, and precious plants in danger, she knew she had to do something. 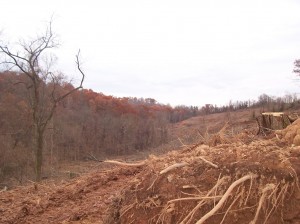 Cutting through woods near Racine.

Young started with a letter.   She wrote to the state agency responsible for the project asking for permission to access the land in the path of the highway to identify any rare plants growing there. (She is hazy now on which agency – so much has transpired since). Permission granted, she contacted United Plant Savers.   Local experts from the group identified several at-risk and endangered plants in the path of the bulldozers.

At this point, it was too late to try to stop the highway, so she did the only thing she could think of.  She dug up several endangered plants and replanted them on the family farm.  By nature, Young is not afraid to dig in and get her hands dirty.

As a child she hadn’t noticed, but as an adult she did.  Her small village was overshadowed by four coal-fired power plants, all within an 11-mile radius of her farm.  Smoke bellowed into the air, and black dust settled on everything.  The plants were polluting the community.

As the years passed, Young discovered her neighbors seemed to be getting cancer and respiratory disease at what seemed to be a high rate.   Even children were affected.  By 2000, Young had had enough and took action.

And so Young faced another threat to her dream – pollution, illness – contaminated land and air. 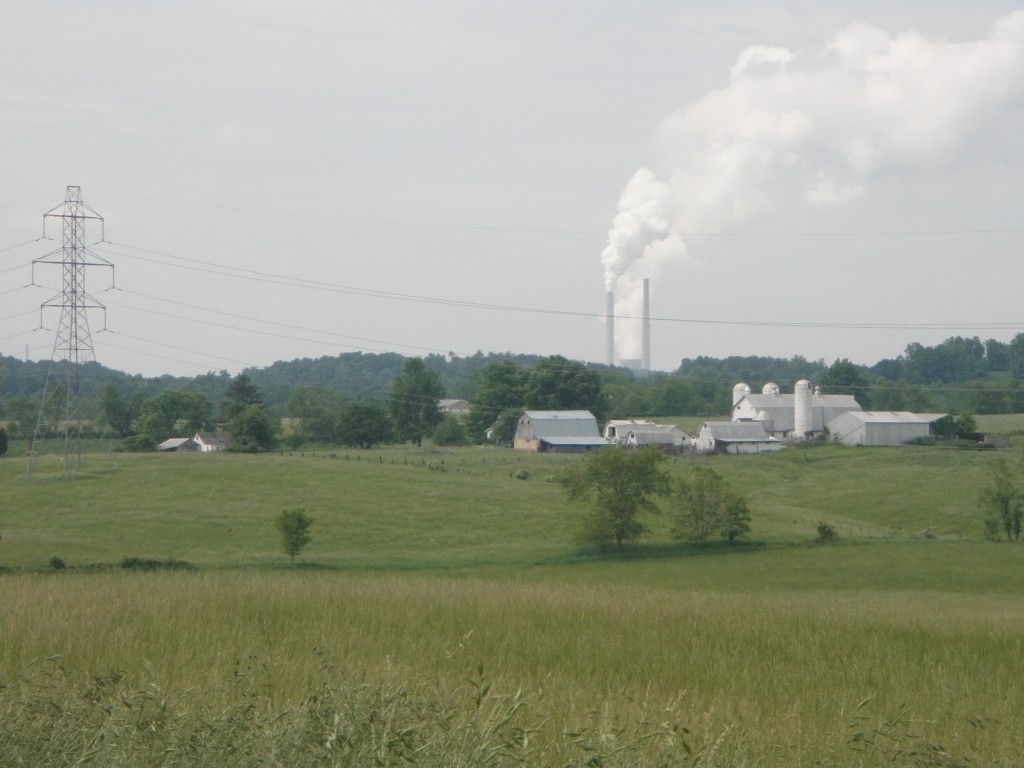 Young’s family farm in the shadow of a power plant.

The four coal-fired power plants in her rural area supplied power to hundreds of thousands of people in cities as far away as Cleveland.  But those people did not suffer the effects of coal-fired power generation.

“I think the fact that I had lived in other places made the injustices stand out more to me than to the people who had spent their whole lives there. The folks who lived there for generations were embedded in a culture of coal, and more likely to accept that this would affect their health, even kill them.  That was completely unacceptable to me.” Young said.

“I learned that even so-called ‘clean-coal’ technology doesn’t get rid of the toxic mix spewing into the air,” said Young.  “It concentrates them.” 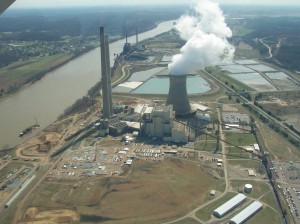 A coal-fired power plant near Racine.

The area may be small, rural, and poor, but it is anything but quiet.  In and around Racine, coal barges and trucks haul tons of coal to the four coal-fired power plants that belch smoke from their towers.

Around 2003, there were plans to build up to five more in the area.  That would constitute the largest concentration of coal-fired power plants in the US.   Young knew by now that the majority of pollutants from smoke stacks falls within 15 miles.

The plan to build more power plants in this rural area – with a population already suffering the effects of existing ones  – seemed just too damaging and unfair to Young, just too much coal fired power plant pollution.  With a burning desire to help her neighbors, and a passion for justice, Young jumped in.

Like any good community organizer and change agent, she knew she would have to find out what the community wanted.  She should not impose her own views, so she decided to initiate a “listening project” to find out what issues community members were concerned about.

The result of these meetings and Young’s listening project was the formation of Meigs Citizens Action Now (Miegs CAN, an acronym which Young said she especially liked because of its positive sound).

With a group behind her, over the next several years, Young asked tough questions – about regulations, permits, health effects, environmental impacts, legal issues – and fought for answers from companies such as American Electric Power (AEP), AMP Ohio, Arch Coal, and Massey Energy, and agencies such as the U. S. and the Ohio Environmental Protection Agencies (EPA), the Ohio Power Siting Board, the U.S. Army Corps of Engineers, and the Ohio Public Utility Commission.

Student Greenpeace members on a True Cost of Coal tour. Young is second from the right.

One of Young’s initiatives was running “True Cost of Coal” tours from her farm.  She wanted people to experience first-hand the effects of the plants on the landscape, land, and community.

Young was not the only citizen voicing concerns about adding more power plants to this rural area.  Many groups were fighting the plant.  The Oberlin City Council, Sierra Club, college students, and thousands of Ohio citizens attended public hearing, wrote letters, emailed petitions, and spoke out against siting another coal-fired power plant there.

By this time, however, Young had become a determined and vocal activist – and something of a celebrity in environmental circles.   She even won an award from the Women’s Peacepower Foundation for her ‘True Cost of Coal” Tours.

But with that notoriety, came a downside.   Her fight against coal fired power plant pollution made her some significant enemies – in power companies, state agencies, and even in her community.  She received several threats.

There’s more.  Her commitment to the fight also cost her job, her peace of mind, and some of her family and personal relationships.  But all that did not end her fight for environmental justice.

In November 2009, AMP Ohio decided not to build another coal-fired power plant near Racine, Ohio.

For Young and all the others who fought the plant – a victory.

(Plans for the other coal-fired power plants are on hold, tied up with funding and other issues.)

Today, Young is a bit burned out – and burned by the experience.  She no longer lives in Racine.  She has reluctantly given up her dream.  Young feels the area still has too many coal-fired power plants and too much pollution raining down.  The community is still riled up and the issues are too raw.  Young felt she needed a new start, so she moved near Athens, OH, about 40 minutes from Racine.

The move has not put a stop to Young’s commitment to protecting the health and property values of people in rural communities.

Currently she sees injection wells and “horizontal fracturing” a process that extracts gas from deep deposits underground as a threat to the health of communities.   Ohio has thousands of injection wells – holes in the ground in which waste containing various pollutants from oil and gas extraction are dumped.  And there’s a new push from energy companies to lease land for extracting gas from underground deposits embedded in shale, hundreds of feet below ground.  Many believe these activities pose environmental and health dangers, especially with regard to water quality. 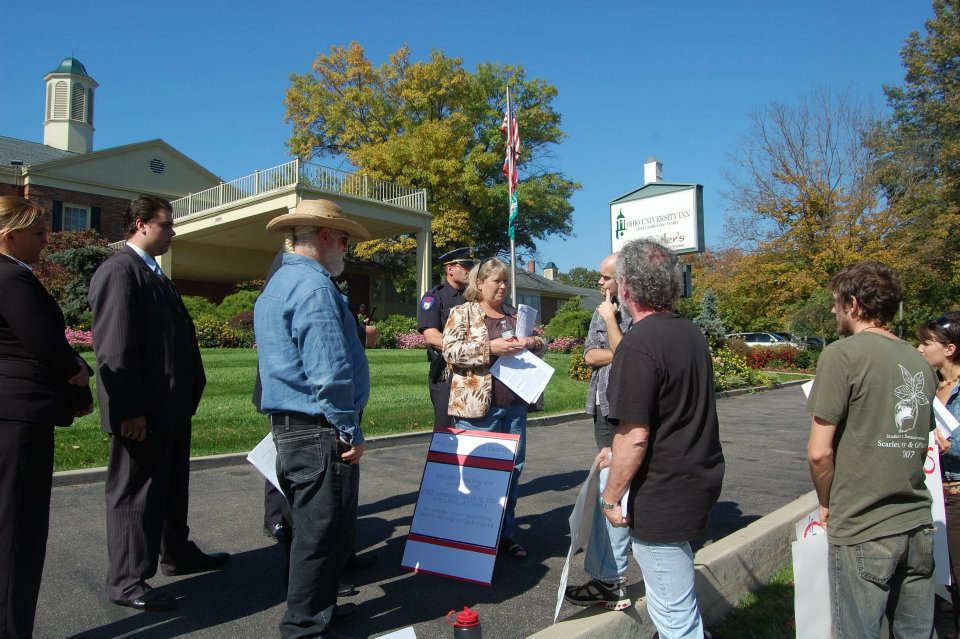 “I know that people can and must stand up for what is best for their communities – and the health of the people within them,” said Young. “People can stop harmful projects. Knowing that, I just can’t sit by.  I have to put my experience to work for the good of communities.”

Young is a fighter – a combination of Norma Rae and Erin Brockovich, passionate about protecting people and the land, dedicated to the facts, and savvy about the political and regulatory processes.

What stands out most about Young is her unwavering focus and dedication.  She admits sometimes she stays up all night reading the fine print of various technical documents.  Most of us would have given up by now.  But not Young.

Her little act of saving a skullcap bush lit a big fire of activism that still burns brightly – Young’s commitment to protecting people and the land seems to have grown ever stronger.

Photos courtesy of Elisa Young, except where noted in the caption.  Feature story by Bojinka Bishop.

For more stories about people doing important and fascinating things, click on the “People” tab in the blue navigation bar at the top of the page.

Editor’s Note:  According to Eric Klinenberg, author of Going Solo, The Extraordinary Rise and Surprising Appeal of Living Alone, “… people who live alone tend to be more involved in volunteering in civic groups [than married people.]   From an interview on the Diane Rehm Show, Feb. 7, 2012.

And Bella DePaulo in her book, Singlism, noted a study by E. Kay Trimberger (in The New Single Woman, Beacon Press, 2005) that showed singles have strong ties to their extended families, are adept at forming networks of friends, and are very involved in their communities.

Share your stories of solos involved in civic life in the comments section.

Comment(s) on Passion for the land ignites activism