Paris Under Ground – Why this space?

Paris: The city of love, where people like to be close.  Paris: Host to 27 million tourists a year.   Paris: With the seventh busiest metro system in the world with 1.5 billion annual passenger rides.

Given all that, at Metro stations, Parisians have found a way to get some space – maybe, sometimes.

There are two mysteries here – one is, with more than 1.5 billion passengers a year, how the author was able to photograph so many Paris Metro stations with so few people.  The second mystery is the seating design. 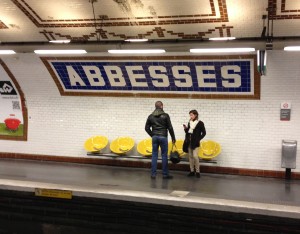 Some of the closer seats. These two prefer to stand farther apart.

The seating in each underground metro station varies.  In some, you might sit about a foot apart, in some three, in others up to six feet apart.  You’ve got your space!  It seems clear that these stations were not designed for practicality – for accommodating the most number of people.  Then for what?

Adding to the mystery….

According to Michael Landers, director of a group called Culture Crossing which shares interesting information about etiquette in different countries,  the French don’t mind being a bit closer than people in the U.S.  For the French, a bit less than an arm’s length is OK, for us in the U.S.,  it’s a bit more than an arm’s length.   (So why are the seats so far apart?) 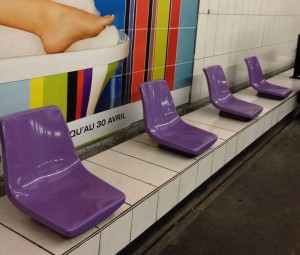 Enter Edward T. Hall, he’s a famed anthropologist who studied how we humans use space within the context of culture (Proxemics).

According to Hall, we humans care how close we are to someone depending on what the situation is. 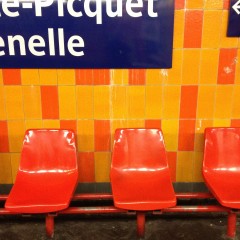 Cheerful red seats for those who don’t mind someone in their personal space. 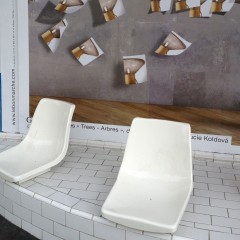 Anyone who has ever ridden a metro or subway (or bus) or has waited in line for a movie knows these rules are violated all the time.  (Does anyone else want to elbow the person in the movie line whose breath you can feel?  Hall has us given a rationale for this urge!).

Of course, once you get on the Paris Metro, most likely you will be squashed up against a total stranger.

So, why this respect for personal space in the stations?  Why are the seats placed at such civilized distances?  Is it to give you one last moment of respite before riding the noisy, crowded train?  Is it to add as much civility as possible in the dark underground life of Paris?

A clever and easy way to rest.

How clever of the French to respect the need for personal and social space – at least briefly!

And here is another great invention, which I call the “butt rester,”  or “stand-‘n-sit.”  Here you can decide how much space is comfortable.  And move quickly if you feel someone is too close.

Paris has many mysteries – and seating in the underground Paris Metro stations continues  to be one.

Story and photos by the Bojinka Bishop.

Add your experiences to the mix: enlighten us with other odd public seating configurations!  Or examples of respect for personal and social space.  Post your comments.