What will I become?

After hundreds, no thousands, of miles of flat lands – there they were, the purple Rockies rising mysteriously in the distance.  I had almost arrived. It was a return home, of sorts.  At least to one of my hometowns, Denver.

This place, too, like the others I’d lived, was home to both soaring high points and deep lows, moments as beautiful as wildflowers swaying in the high-meadow breezes, and other times as prickly as cactus, or as dark and deep as a canyon at nightfall. 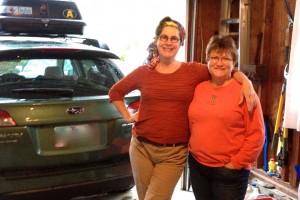 Precious, kind friends Francoise (left) and Rita (right) who helped me pack up the “turtle.”

I’d chosen to return from my 14-year sojourn in Ohio, driving my turtle car, its black roof-top carrier creating my own kind of shell. Having packed for months, having traveled around with no home and most of my furniture and belongings in storage, my car was my home.  Not that I slept in it – but I had no familiar place that held my everyday things – no bed to call my own, no familiar mirror in which to see myself reflected, no easy chair molded to my body.

Some say our belongings define us, some say they give comfort, so what do we do without them?  Become uncomfortable?  Lose our identity?

my mother painted that I always hung in the kitchen,

a red enamel cup I bought in Japan, the coffee table I had since I was 26 and had moved around the country,

the little green stripped ceramic turtle my daughter made in first grade.  Beach glass I had

collected over the years. I also packed a wooden spoon I got in Ukraine and a bell from the Solari studio in Arizona, where I swear I saw Mr. “Solari” running naked into the woods.  It was a trip with a friend and as we sat in New Mexico on the steps of a high adobe village, something struck us so funny that we laughed like hyenas for at least 20 minutes, our laughter floated out across the valley, and was made even louder as it echoed across the open land.  It was laughter for the ages.

What was I without these things, these things that embodied so many important times in my life?  These talismans?

A friend had said when I told her of my plans “where are you going?  Ann Arbor, Ithaca, Virginia, North Carolina, Texas, South Carolina, back to Athens – you’re hopping around like a rabbit.  Aren’t you worried about traveling alone with no final destination?”

Worried, no.  My journey was a process to decide where to live.  Should it be Ann Arbor where I spent my young motherhood and had so many deep connections?  Fairfax, VA? Near my oldest daughter?  It’s crowded, expensive, and hot – and Sarah’s so busy with her own family – 10-year old triplets.  I was there when it mattered, when she was pregnant, gave birth, prematurely, to three babies – so tiny they didn’t even look human. They were hooked to machines, tubes taped to their faces – I feared their thin papery skin would peel off when someone removed the tape.  The months in the NICU – their coming home. Once or twice their heart monitors going off – their hearts stopping, and Rob and Sarah saying- we’re supposed to shake them to get their hearts beating again.  Unbelievable – shake, shake, pump, pump, baby engine-hearts starting up again. They escaped death so many times!  And today they are happy and active. Interested in football, gymnastics, video games, music – they no longer need their gramma to tickle their feet and read them stories before bed.

Ashville, NC – nice place, surrounded by mountains, the Blue Ridge, not the Rockies.  Town too small, mountains too small.  Moving on.  Texas was just to visit my son and his family.  I stayed two months.  Lovely to be part of their family, the twins, too,  though at 12 ½, they are more interested in fashion and fitting in than in playing tennis with gramma. 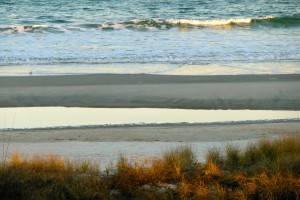 Then a month at the beach – South Carolina.  Tempted to move there – but – too humid in the summer, not enough to do, no close cities. San Francisco? I visit my youngest daughter when I can. It would be a

Youngest CA grand daughter enjoying a moment of being punk.

dream to live there, but too expensive, and I don’t really know my way around.  Better to live in a place with memories, familiar places, a place I can navigate with some know how.

So, after Texas, in my turtle car, I clocked the miles to Denver, intent on the destination, one mile at a time.

Story and photos by Bojinka Bishop