Talk, shoes, mushrooms. What is art?

The art of conversation used to be judged by the quality of what was said. Now, it seems, just having a conversation is considered art. At least by the Denver Art Museum and Denver artist Viviane Le Courtois. 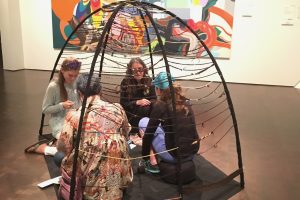 Le Courtois hosting a conversation in the pod at the Denver Art Museum.

The museum chose Le Courtois to be an Artist in Residence for a two-week installation last year in the Audacious Gallery. Her work was a “Global Thinking Pod.” Le Courtois sat in a wire tepee she made. She was crocheting and invited people in to sit on a pillow, crochet (or learn to) and talk. To engage in a conversation.

It’s the crocheting that opens the door to talking, according to Le Courtois, who always dresses in black (“I hate color”). During the Denver Art Museum exhibit, she taught about 100 people to crochet. And talked to even more.

“The artist didn’t even get a lunch break yesterday, there were so many people waiting,” reported a gallery host the second week in. 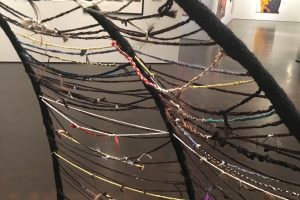 The pod embellished with people’s work.

David Bernot, a University of Denver music student, after coming out of the pod said he thought it was “really cool” to learn to crochet. He said he and Le Courtois had good conversations about art.

Ed Manning, a design engineer from Wichita, KS, also enjoyed it. He, too, had never crocheted before, had casual conversation, and said, “You never see an exhibit where you can contribute like that.”

Le Courtois had something else in mind, in addition to crocheting and conversation, something deeper. 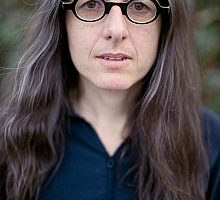 “I picked the spot [in the Museum] because there are lots of social and political issues in that room, more than any place in the museum,” she said. The gallery she chose displayed war art and a loud and violent video installation played in the background.

This was not the first “Thinking Pod” Le Courtois constructed. It’s her third and each is made of different materials. In Ireland in January 2016, she made a pod with all natural materials, sheep’s wool and rush.

“But this one is more interactive,” she said. Here’s why.

After her Ireland exhibit, Le Courtois visited her family in France. It was right after the Paris attacks.

“I could feel the tension in the streets,” she said. “It made me want to do something about what’s going on in the world. There is so much violence in the world right now.”

Locks of hair – traces of DNA and conversations.

Talking, casual or deep, was part of the connection Le Courtois hoped would take place. The other aspect of her installation was documenting the conversations with participants’ DNA.  She cut a lock of hair from the willing, wove it into the crocheted string the participant made, and attached it to the wire pod.

Some people passed on the hair cutting. And some people didn’t want to engage in deep conversation about the state of the world.

“A lot of people said they came to the museum because they didn’t really want to think. They didn’t want to analyze the work, they came for a break from the world,” she said.

Others, however, stayed longer, some up to two hours, according to Le Courtois. And she had deep and important conversations with them about the state of the world. Mission accomplished.

Le Courtois’ interest in the larger world is not new. She grew up on a farm in Brittany, in northeast France. As a kid, she had a pen pal in Senegal and finally visited her when she was in art school. The visit changed her life – for two reasons.  One, she saw a whole new world – a third world. She also contracted malaria and was hospitalized for weeks. It gave her a  lot of time to think.

After art school in France, she traveled on a shoestring, backpacking much of the time through China, India, Korea, Tibet, and Nepal.

Her worldview continues to expand because in her teaching job at a nonprofit arts organization she comes in contact with many refuges and immigrants.

Her own childhood was not posh. She says she grew up “in the middle of nowhere” and didn’t go to a museum until she was in high school. But she was always interested in art, as a kid she had to improvise on materials. She used scraps of paper from old envelopes and junk mail to draw on. She cut the flowers from her mother’s garden to make paints. 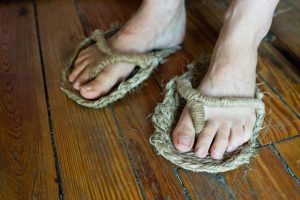 One of the 181 pairs of shoes Le Courtois makes and wears.

Indeed, she’s been weaving her own shoes since 1991. To date, she has made 181 pairs. And she considers her shoes, and the way they wear, fray, and indent, as art. In 2010, she created an installation of 126 pairs of her worn shoes at the Museum of Contemporary Art in Denver.

“Art is usually made by hand,” she said. “I wanted to make art with my feet.”

Le Courtois has had other offbeat installations. Her art centers on social issues and nature. She currently works on pieces involving food. One installation consisted of a trough of edible greens which people then ate. She creates etchings with Kombucha mushrooms. The Denver Botanic Gardens featured her work at an exhibit last summer. 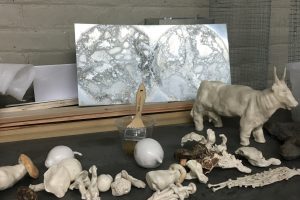 Kombuca etching and other artifacts.

Le Courtois made these also.

She and her partner, a photographer, have opened a co-working space, Processus, for artists in the hottest new art area in Denver, the RiNo District. His photography equipment, plus all kinds of other tools, cutters, and even an antique sewing machine, create a space that seems not only to allow creation, but to inspire it. 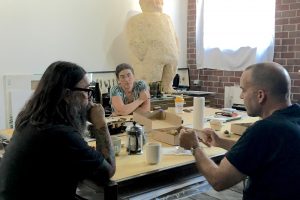 Coffee and conversation at Processus

Le Courtois and her partner often host conversations for other artists, complete with coffee and French pastries. It seems fitting for this diminutive artist who wanted to expand the concept of art to include conversations about the state of the world, and makes art with mushrooms.

No doubt she will continue to surprise and push the boundaries of what constitutes art.

Story and photos (except shoes and portrait) by Bojinka Bishop, Jan.  2107

For more on Le Courtois’ unique artistic vision and works – visit her website – also the arts at Denver Art Museum .

Comment(s) on Talk, shoes, mushrooms. What is art?