Arnald Gabriel is off to conduct in Chicago, Miami, and other cities. You’d never know he’s almost 90.  He looks 60.  He packs his favorite baton. It’s light, made from balsa wood.  He chose it because it balances perfectly on his finger.  To a conductor, every detail is crucial. 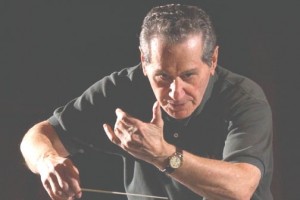 Note from the official program – The D-Day 70 Memorial Wind Band will be a highlight of the D-Day 70 Memorial Concert at Normandy American Cemetery and Memorial on June 6, 2014. Wind bands and individual band performers from across the United States are invited to participate in this once-in-a-lifetime experience.

Conducted by Colonel Arnald D. Gabriel – Conductor Emeritus of the United States Air Force Band, and member of the United States Army’s 29th Infantry Division that fought in the Battle of Normandy – the mass band will rehearse in Paris for several days, as well as present a concert, in advance of the June 6 performance in Normandy.

This concert will pay musical tribute to thousands of Americans who never returned to America, having given their all for the present freedom of Europe and our country.

From Col. Gabriel: “This will be an emotional experience for me since I am a survivor of the D-Day landing.”

Gabriel, who now lives in Alexandria, VA, has had a life-long passion for music.  When he was 10-years old, his father took him to a production of Cavalleria Rusticana, a one-act opera by Pietro Mascagni.  Gabriel says he was “transported.” And right then and there he decided he wanted to dedicate his life to making beautiful sounds.  To this day, the intermezzo piece is one of his favorites.

As in all lives, especially ones that span decades, lots happens.  In terms of music, after playing the flute in the high school band in Cortland, NY, Gabriel headed off to the Army and served in the infantry in World War II.  He was at Normandy, and he earned two Bronze Medals and other awards. Upon returning to upstate New York, his high school band teacher talked him into going to Ithaca College, a near-by and well-known arts college.  He earned both bachelor’s and master’s degrees there, studied conducting, and served as conductor for several local bands and orchestras.

Editor’s note: What’s the difference between a band and an orchestra? Bands have woodwind, brass, and percussion instruments.  Orchestras have those and also stringed instruments.

About that time, the Korean War was ramping up, and soldiers were being recalled.  Gabriel saw that the U.S. Air Force Band had an opening for a conductor.   He joined the Air Force, tried out for the conductor position – and got the job.  The rest, as the saying goes, is history. 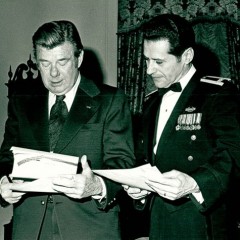 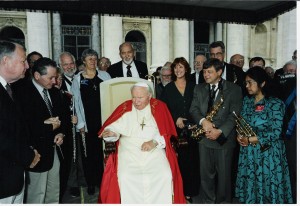 As conductor of the Air Force Band, Gabriel found himself thrust into the limelight.  He traveled the world and met hundreds of important people, from the Pope to U.S. presidents.  And he invited more than 150 guest artists to sing and play with the band, including Doc Severnsen, Shirley Temple, Dave Brubeck, Captain Kangaroo, and many others (even Big Bird!).  What stands out to Gabriel is that these famous entertainers were “very down to earth and not hard to work with at all.”

Gabriel retired from the Air Force in 1985 and joined the faculty at George Mason University, retiring from there in 1995, after serving as conductor of the GMU Symphony Orchestra and as chairman of the Department of Music for eight years.

Although retired from those positions, Gabriel still works, a lot.  This year, as he has for decades, Gabriel will stand at the podium in front of many bands and orchestras “imposing his will – getting the musicians to do what he wants them to do.”  For Gabriel, that means making beautiful sounds – and expressing pure emotion. In addition to his baton, the most important tool for Gabriel is knowledge, a full and complete knowledge, by memory,  of hundreds of scores, every measure, every note.  It is that knowledge that creates the trust needed between the musicians and the conductor to turn notes into a musical experience.

According to Gabriel’s son, Robert, the Colonel has complete mastery of hundreds of scores.  “I’ve heard him say, in measure 135, there’s a misprint, the woodwinds are supposed to play a C major chord.”

Gabriel brings that kind of total attention and dedication to his craft.

Gabriel conducts several types of music – classical, show tunes, and marches, types of music that are not, perhaps, mainstream today.  So what advice does Gabriel have for enhancing appreciation of beautiful music that “touches the soul?”

“Some music tells a story, so knowing the story can be helpful.  I usually have extensive program notes and introduce the piece.”  Gabriel said.  “Other music is pure emotion, so you just have to be open and let the music and emotion take over.”

You may want to listen to some Colonel Gabriel’s favorites:  In addition to Cavallera Rusticana, his favorites include Symphonies 4, 5 and 6 by Tchaikovsky and Symphonies 1 and 5 of Gustav Mahler.  But, he says, “to be honest, there are so many truly great works that I love. “

Could it be any other way?  After all, music is his life.

Editor’s note: You can listen to one-minute samples of Gabriel’s favorites free from Classical Archives – or purchase downloads of the full symphonies.

Comment(s) on Music keeps him young