No more roadblocks for her

The guy on the bike wheeled up close in the underground parking lot. “I was sure that racing car belonged to a guy in his 20s, or at the most, 30s,” he said looking back and forth from the black souped-up Mustang to Janet Colville, who is 70. 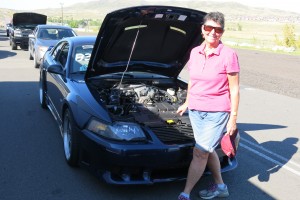 Colville with her 2002 Mustang. Photo courtesy of Colville.

Not only does Colville own the car, she races it just about every week from April to October. She started racing last year, at age 69.

“I started racing the summer of 2013, using my Prius. I bought my Mustang in December, 2013, using it all of the 2014 season except for once, when it was in the shop. I took the Prius to the track that day,” she said.

Was this former bookkeeper, now weaver and photographer always this daring, this unconventional? You be the judge.

As a teen-ager growing up on Long Island in the 1950s, Colville often took the train alone into Manhattan to see plays on Broadway, go to the Museum of Modern Art (MOMA), and hang around in Greenwich Village, a hot-spot for artists and rebels then. She saw Bob Dylan on the street there, as well as many artists and writers. But like so many women who grew up in the late ‘50s and early ‘60s, she enjoyed some freedoms, but not the important ones.

As a 17-year-old, her dream was to be in the tourism industry. She set off from New York to attend the University of Denver. The department head soon set her straight.

“You won’t graduate,” he said. “You’re a woman, and tourism is for men.” Younger readers will find that hard to believe – but for others, it dredges up the memories of old roadblocks.

Discouraged, Colville returned to her dorm room and picked a new major, Dramatic Literature and Criticism. Due to a serious health condition she had to spend her sophomore year back in New York at New York University. To help pay her tuition, she took a part-time job as a receptionist in the garment district, and when the bookkeeper quit on Colville’s first day, the accountant trained her to take over the job. That turned out to be a stroke of luck as bookkeeping was a skill that would come into good use throughout her life.

But Colville loved Denver so she went back to the University of Denver to continue her studies, double-majoring in Theater and English with a minor in Religion. She did some summer stock, and then decided she wanted to go into the Peace Corps after graduation. A single woman going off to a foreign land?  Her parents said “no,” another roadblock.

She tried graduate school at Villanova – but eloped after a couple of weeks with her boyfriend. After several months living in Manhattan, they decided to move to Colorado, buying a small home in the foothills outside of Denver. Family and two daughters took center stage. And Colville worked at several jobs, from typing envelopes for a penny a piece to a much longer career as a bookkeeper.

Fast forward to 1995 – she and her husband retired to New Mexico, to a very small town near the Texas border. “One of the only places we could afford,” she said. And there Colville got back in touch with her artistic side. 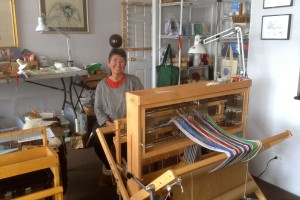 Colville in her studio

It’s hard to keep track of her various arts and crafts. She grew gourds, decorated and sold them. She took up photography, digitally altering and manipulating the images into works of abstract art. Those sold well, and she still creates and sells cards using that technique. In 2002 she and her husband moved to Los Cruces, NM.

“It was a much larger city and had a great Farmer’s Market. I sold lots of cards there,” she said.

In the meantime, her husband died and that meant another big change in her life. But Colville is nothing if not resilient. She moved back to Colorado

During an Elderhostel studying Spanish at Northern New Mexico University, she wandered into the weaving studio and remembered that she had wanted to learn how to weave.

“I always liked yarns and textiles. I’d done a lot of knitting. But weaving is challenging in a different way as it produces cloth that can be used for so many different purposes,” Colville said.

An experiment with the Sunday comics

“At first I wove dish towels, because I was interested in structure,” she said. She still weaves them, but now uses cashmere, silk, alpaca, mohair, hemp, cotton, and wool for a variety of weavings, such as tapestries, shawls, wall art, placemats, and scarfs. She also likes to experiment with materials, so she wove strips from the Sunday comics.

One of Colville’s favorite yarns is tencel because “it’s soft and drapes beautifully for shawls and scarves. For towels I love natural cotton as well as hemp and linen.” 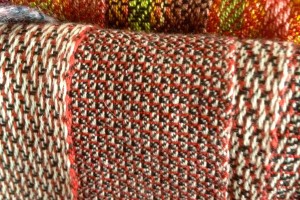 Some of Colville’s weavings. Colville won 1st, 2nd, and 3rd place in weaving at the 2012 Denver County Fair.

Weaving is a sedentary craft – it requires sitting at the loom for hours on end. But Colville has never sat still in her life. Maybe that’s why she took up auto racing in 2013.

“I’ve always loved to drive, and I love the speed,” she said. “It’s not so much about winning, but it does feel good to get through the finish line first.”

She not only races her Mustang Saleen (Steve Saleen was a racer who modified cars – and hers is modified in the Saleen tradition) she also takes extended trips in her camper-van including a three-month trip to the Yukon and Alaska.

When you talk to Colville – about racing, weaving, or life in general, you might make the same mistake the young guy on the bike did and not think she’s over 30. Maybe that’s what overcoming roadblocks is all about.

Story and photos, except where noted, by Bojinka Bishop, October 2014.

For stories about other fascinating people, click on the “People” tab on the navigation bar at the top of the page.

Comment(s) on No more roadblocks for her