LoMean Noodles – that’s her derby name.  Her real name?  She didn’t say.  It’s not important in roller derby – what’s important is to have fun – not only with your name but also in the sport. 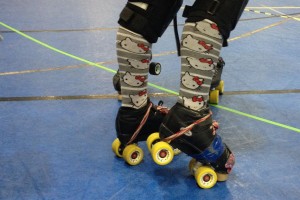 Names like Jill House Rock, Surly Temper, Road Block, Toxic Taunic, and Wrecking Belle abound.  These skaters with their colorful outfits and roller skates leave the polite decorum of their work lives behind for derby.  It’s a fast and furious sport in which the Jammer tries to skate through the pack while the opposing team blocks her way.  Blocking includes shoving, hipping, pushing … and falling. 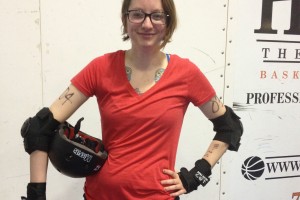 LoMean Noodles after a jam in Virginia.

LoMean says a friend got her involved and now she’s hooked.  “There so much great energy here,” she said after a recent jam at the Michael & Son SportsPlex at Dulles in Sterling, Virginia.   “Everyone helps each other out.”

Team camaraderie abounds – and teams are primarily women, although some co-ed teams exist.  It’s a highly physical sport and it’s growing in popularity.  The sport debuted in the 1930s, was an early TV staple, dramatized for the audience, and then faded in popularity in the 1970s.  Now it’s in resurgence.  A YouTube video that explains its origins and rules claims it’s the fastest growing team sport in America.

According to an article in the Wall Street Journal, there are now 1,250 leagues worldwide, with nearly half of those outside the U.S. 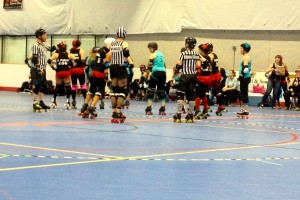 Like any sport, roller derby takes lots of practice – skating, running, stretching.  And special equipment – different wheels for different surfaces, and lots of pads for knees and elbows, and a sturdy helmet. 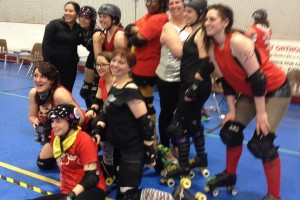 Interesting side note: Apparently, it’s a rougher game in some areas than others, with different rules.  Intuitively, you’d think perhaps that it would be rougher and more competitive around DC and a bit more laid back in CA.  Not so, it’s the opposite. Sources (full disclosure – my daughters) tell me that around San Francisco, at least,  league rules allow skaters to turn around and skate into others head on to block.

But for LoMean and her teammates, engaging in the sport is worth the risk for the exercise, competition, opportunity to break out of the work-week routine –  and above all, for the camaraderie.

Of course, this is not a sport for the faint of heart – or probably anyone over 50!  It’s fun to watch, though, as you can’t help feeling energized when cheering on these brave women.