What does a sense of humor have to do running a homeless shelter?  Being a sales manager? A nursing assistant? A ballroom dance instructor?  A certified archeologist?  Or a mediator? A lot  – if you’re Tonya Dalhaus who also parleyed it into a stint as a stand-up comic.

Dalhaus has lived more than nine successful professional lives already and she’s only in her early forties.  She credits her sense of humor with much of her career success. In talking with her, you find out that’s only part of it.

Originally from Concord, NH, Dalhaus spent most of her life on the East Coast.  She majored in journalism in college but “was turned off that getting to the story often meant putting your morals aside.”  Rather than watching and writing about personal tragedies, she wanted to help people.  So she became a certified nursing assistant at a school for kids with learning disabilities.

From nursing to digs to dancing

Jumping in with two feet seems to characterize Dalhaus’ life of adventure.  She married, moved to Oxford, England for a couple of years, worked as a nursing assistant, came back.

Back in New England, she got interested in archeology.  And in Dalhaus fashion, she got certified for digs.

“It looks glamorous,” Dalhaus says, “but the reality is archeology means a lot of digging big, deep holes and sifting a lot of sand and dirt to find a tiny object. Fun for a while.”

Not enough fun to sustain her, so she took ballroom dancing lessons evenings at an Arthur Murray studio – saw an ad for instructors, got trained, and became one.  She taught part-time for six years.  “I loved it,” she said.

From dancing to the college bound

Her days took on new challenges – one job was working in a homeless shelter for three years, another was being a bailiff and court security officer.  Did she carry a gun?  Yes, she had extensive training, but this is one job Dalhaus feels she wasn’t very good at – she wore heels and would call on a burly co-worker for the hard stuff. 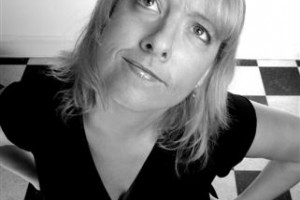 At some point she divorced and found work for a private online college as an admissions officer.  That’s where she began to figure out her love for performing.  She was a high school presenter, encouraging kids to enroll in that college.  She found the kids liked her sense of humor.  They said, “You’re so funny.” The germ of another career was born!

Dauhaus spent time training for all her jobs – and comedy was no different.  She attended classes offered by the Portland (ME) Comedy Connection and on graduation night did an open-mike session and found she really was funny.  That started her six-year stand-up career.

“It’s all about the writing,” she said with a grin (and a grimace.)  She would take her tape recorder to bed, wake up in the middle of the night, taping, writing, rewriting.

Dalhaus performing at a club. Photo courtesy of Dalhaus.

“You may start with 100 words,” she explained, “then keep condensing it down to one sentence.  It was grueling.  Great when you finally got to a joke that people laughed at, but a lot of work to get to that point.”   She did, however, make a career success of it.  “For one thing, clean comedy is pretty rare and it’s in demand,” she said.  Dalhaus performed in Manchester, England, NYC, Boston, Tennessee and other places.

She relied on herself to book gigs.  “I’m a good networker and I’m not afraid to talk to people.”

Next, sales to real estate to working with the homeless

So one of her contacts offered her a job selling ads for a TV station in Maine and she did a little stand-up in the evenings.  She was great at ad sales and did it for several years.  But change was brewing.  She left the TV station. Went to Europe couchsurfing, landed in Berlin in a “bad area.”  That woke her up and she went back to Boston.

While teaching ballroom dancing again, she got a real estate license and did a lot of rentals.  That familiarized her with the Section 8 housing codes and rules.  She found many landlords didn’t want to accept Section 8 tenants. (The Section 8 Housing Choice Voucher (HCV) Program is a federal program that provides rental assistance to very low-income families, i.e. families with incomes below 50 percent of area median income). 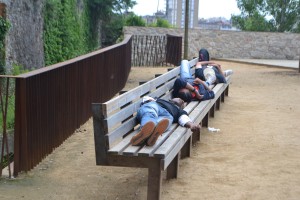 This got her interested in “shelter issues.”  It harkened back to her homeless shelter work. Her do-good side emerged again.  She sent out a mass email to all her contacts and asked if anyone knew someone who worked in shelter.  Of course, a friend did.  She set up an informational interview – and three days later she was offered a program director job.

The natural question is, how did she do it, how did she land this job?  Dalhaus said she emphasized all her previous relevant experience. And added, “Sales and working with the homeless are not that different. A lot of working with the homeless is convincing these people in a shelter who are afraid to work, afraid to put themselves out there that they can. It’s convincing them, it’s overcoming objections – just like selling.  It’s working with people and their objectives.”

And her sense of humor, how did that work for her in that job?  It helped her as a manager, she said. Dalhaus ran the program and oversaw 150 families and 12 staff. It’s a job most people burn out on in six months.  She said, “I made sure we laughed… and who doesn’t want to come to a job where you laugh every day?”

But it’s hard to keep a sense of humor working with the homeless.  She began to be bothered by what she saw as a creeping sense of entitlement.  She said working on the personal level with so many people was upsetting in some ways.  For example, she saw so many immigrants to the US showing fierce pride, hustling for jobs, reluctant to take aid, and working hard to be able to take care of their families.  And she saw so many Americans sitting around and asking for more.  “It shakes you,” she said. After three years she burned out.

What to do next?  She found an Alternative Dispute Resolution Program at the University of Denver, a two-year program.  It appealed to her sense of justice.

ADR is a field that focuses on mediating disputes. The parties in conflict, with the aid of a trained neutral mediator, work on solving the dispute themselves and coming to mutually agreed-upon solutions.

Is there any connection between this new career and her past careers?  Surprisingly, Dalhaus said “mediating is coming to ‘yes,’  building on the ‘yeses,’ not stopping the conversation, keeping it going with ‘yes and.’  And it’s the same in improvisational comedy – it’s all about the ‘yes.’”  Comedy and alternative dispute resolution, who would have thought?

Today Dalhaus is finishing her degree. Her current research interest is non-verbal communication and micro-expressions.  She’s in partnership in a “mediation, facilitation, conflict resolution and communication coaching” practice and plans to be a corporate consultant in conflict resolution and non-verbal behavior detection  and a motivational speaker,  motivating people to climb out of their comfort zone.

No doubt she’ll be successful in both with her track record.

That begs the question – how did she get to be the kind of person who has had more than nine successful careers and is embarking on others?

“My parents said, you’re smart, you can do anything you want.  And I guess I believed them,” she said. But she laughed as she said it.  Then she tucked her textbooks under her arm, apologized as she texted to confirm an appointment, laughed again, and set off for another adventure.

Note: Upon reading this, her father, in an email, said Dalhaus used to joke she had a disorder known as MPD – Multiple Potential Disorder!  (Do more of us have that than we realize?)

Click on the “People” tab above to read about more fascinating people.