Why is this bird hanging out alone?

Have you ever noticed a sole egret standing by a stream?  Or just one blue heron alone on a riverbank?  What happened to birds of a feather, what happened to the flock?  (What’s wrong with this bird?)

Richard Gibbons in the field.

Nothing it turns out.  Many birds – like people – are living alone.  Not all birds hang in groups all the time, according to Richard Gibbons, Director of Conservation for Houston Audubon.   “There are plenty of solitary birds,” he said. (Yes, how well we know!) 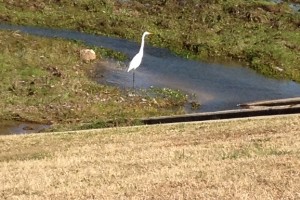 Some of birds’ alone/together behavior depends on food sources. Gibbons told me that my solitary egret was probably staking out his or her food territory.  An egret may stand alone for hours, not even moving.  And when some good food comes along, he/she dines.  (These birds eat alone and don’t seem to miss chattering.)

Gibbons explained some of their alone time has to do with whether their food sources are clumped or dispersed.  If there’s lots of food in one place, lots of birds may go there to feed.  If food is scarce or not close together, birds won’t be either.

For birds, life is not just about food.  For most birds, travel plays a key role. According to Delta Willis of the National Audubon Society in New York, birds are on the move a lot, traveling from north to south and south to north – migrating.  In the winter, maybe 200 species of birds live in Central Park, she said, in the spring about 275 species live there.  (People migrate, too, in the winter thousands of Northerners – known affectionately as “snow birds” – head south to warmer climes.) 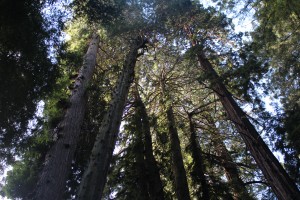 Not Central Park, Muir Woods in CA where many birds live. Photo by Logan Dent

It seems birds lead more interesting lives than I thought, what with migratory patterns, dining habits, not to mention nesting preferences (cavities or branch, for example).  I was beginning to think I was not doing the topic of solitary bird behavior justice, so I checked with Geoff LeBaron, director of the Christmas Bird Count for National Audubon (an initiative in which 60,000 to 70,000 people count birds). He confirmed that not all birds flock all the time.  He mentioned a relative of egrets and herons, the bittern, saying it is a more solitary bird by nature and lives much of its life alone.  (Before you make some connection with its name to an emotional state, Wise Geek reveals the name bittern “comes from the Old French butor, which is believed to have been derived from the Latin butionem, for “bittern” and taurus for “bull.” Allegedly, the birds were given this Latin name because of their characteristic loud cries.”  (So, nothing to do with bitterness, just able to speak up when need be.) 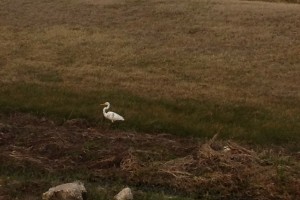 This brief research revealed, much to my surprise, that not only each species of bird, but each individual bird leads a varied life full of adventure and activity, what with travel, hunting for the right foods, dining, building a good nest and all the work those things entail.

So the conclusion is –  my sole egret is not a misfit, and living alone does not mean it’s leading a dull life.  I just caught him/her quietly – and wisely – preparing for dinner.

For a beginners guide to bird watching, check out this great resource https://hobbyhelp.com/bird-watching/?msID=c364a370-effb-4378-8eb1-7dfe