Personal Story: Joy in the unexpected 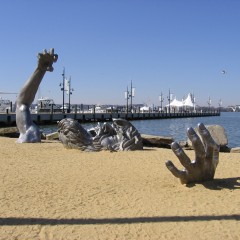 Rush here, rush there.  Most of us have no time for mistakes.  My GPS said, “keep left, keep left.”  And I believed it – and whizzed past the exit for Route 1 that would take me to Old Town Alexandria, VA near DC.  Then I saw a sign – “National Harbor” – and wondered, does the U.S. have a national harbor?   Worth a look.  Turned out 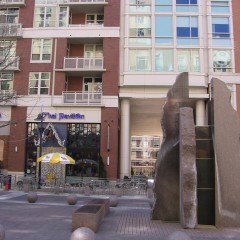 There’s nothing national about National Harbor.   It’s a “new city”  (I was told it was a city.), part of a relatively new movement to create “town centers” – new living , shopping, cultural centers.  Easton Town Center near Columbus, Ohio and Belmar in Lakewood, Colorado are examples.

National Harbor proved to be a quiet oasis with a nice harbor view.  Most interesting was the sculpture in the playground – a buried giant clawing out of the sand.  The sculpture by J. Seward Johnson, Jr., whose bronze life-sized people sculptures appear in cities around the world, created it for the International Sculpture Conference in 1980.  The developers of National Harbor purchased it for $750,000 in 2007 and installed it on the edge the Potomac.  Kind of cool. 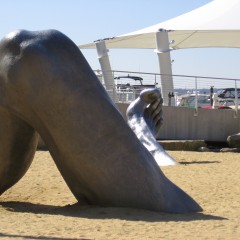 A leg and foot emerging from the sand.

Usually, we are all so busy we don’t have time or patience for mistakes or diversions.  Sometimes, if only for a minute or two, it’s refreshing to happen upon something new, something that jogs our curiosity.  And reminds us there is a big fun world out there! If only we take time to notice.

Story and photos by Bojinka Bishop.

Comment(s) on Personal Story: Joy in the unexpected